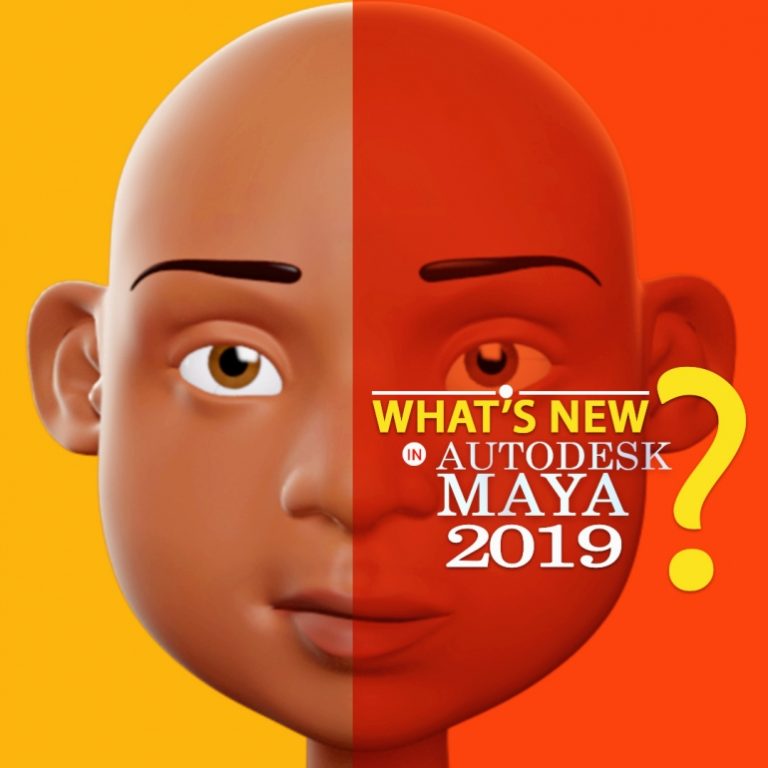 Autodesk Maya Software is a 3d Animation software that most 3d Artist always anticipates to see their new release/update especially with this widespread of “more than 400 Fixed Bugs”. As a 3D Modeling Artist am always curious to try new releases or updates on any 3d software especially Autodesk Maya which is the most used and Industry standard for 3d Animation. Ideally, a news release or update presupposes bringing about new features that are meant to speed up workflow.

On this note, I’ve tried to install all previous Versions of Autodesk Maya Software from 2014 to 2018 and even the Last release, Maya 2019. Exploring Maya 2019 for Comparison with the previous version, I actually come across the following features, although most of the features do not favor Modelling Artist we cannot shy away from the fact that they are tools to make 3d animation better. The three most important features of Maya 2019 are Fast Maya, Beautiful Working environment, and Fast Animations/ Cashed playback. Let me explain these in detail.

I place “Fast Maya” as number one on the list because is the only general feature that favors all 3d artists using Maya. It is undiluted fact that Maya 2019 load faster than the previous versions. Maya 2019 have made performance improvements in a lot of areas, making this version faster in several different areas, in ways that more artists will notice in their everyday work, these improvements are listed below:

Beautiful Working Environment is another feature in Maya 2019. The newly Added Arnold Viewport gives an edge to preview Arnold’s standard surface shader so that what you see in the viewport is a lot closer to the final result you are going to get from an Arnold render as a preview.  Waiting for final renders can be time-consuming and creatively frustrating. Illumination (lightings) and reflections are also real-time in Viewport 2.0. Naturally, this makes your working environment a lot better since you can get a good idea of how the content will look straight in the viewport instead of waiting on a preview render.

Surely, it is a newly added feature, but prefer to call it Arnold Render update and not Autodesk Maya new features because this can also be found when you install other third-party rendering engine plugins such as Radeon Pro Render and VRay.

This feature is particularly the main reason why I said Maya 2019 is a version targeted to animators. Maya 2019 has this feature called “Cached Playback” which means a new background process that drastically increases the speed of animation playback directly in the viewport.

With this feature, Maya 2019 is said to give animators a more responsive working environment, with higher-quality real-time previews, allowing Animator to produce better animations by increasing playback speeds. Animators are formerly used to the regular way of animating i.e animate a bit, and relax while you wait for a playblast so you can see what your change looks like at your target frame rate. Cached Playback speeds up animation playback so much that you can use playback directly in the viewport to evaluate your animations. This makes play blasting a lot less.

Cached playback is not just a regular geometry cache as Maya continuously evaluates your scene, rigs, and skin bindings in the background and caches each frame into memory. When you hit play, it simply plays back the cached frames from memory, so you get a better frame rate than if Maya needed to calculate it when you hit play. And, it’s doing this intelligently using either Cache Evaluation (CPU Memory) or Hardware Caching (GPU Memory), so it won’t re-cache frames if no changes have affected the object in your Scene. It is only the ones that have been adjusted or made changes that need to be updated. The upside of this compared to a normal geometry cache is that you can keep working while the cache is happening in the background, so it is much more interactive and there is less waiting time. And also it is better than a Playblast since you can evaluate your animation from any angle or zoom level as it plays back, giving you a much more comprehensive review.

Sweet to hear the concept of Cashed Playback, but the downside of these features is that it requires a high-end PC (Higher Processor speed, Gear force, and enough CPU Memory). Another con of this feature is that it does not support Smooth Mesh Preview and Dynamics during playback.

In Summary, Maya 2019 Loads faster than every other previous version and it can handle projects with Dense Mesh better, Metadata, and Fast loading texture. I guess this is due to 400 bugs that were fixed. Maya 2019 has also included Arnold Render viewport which helps shading and Texturing with Arnold better in terms of creativity, though I prefer to call this Arnold Render update. Lastly is the fact Maya fast animation and Cache Playback which help to speed up playback during Animation using either your CPU or GPU Memory?

I’ll like to rest my pen with the word of AskNK, who said in his “Maya 2019 Review, Reaction and Rants” video for the Modeler, FX Artist, Set Dressing Layout, and every other person that does not Animate in Maya that expectation and anything in the middle, kindly take it as a grain of salt.

In this tutorial, I will show the breakdown of the abstract animation in Maya and After Effect.  Website: www.earlybell.comFacebook: www.facebook.com/earlybellonlineTwitter:

In this tutorial, am going to show you how to use Adobe Photoshop to create a planet Galaxy. The project